💡 if the database is in danger of violating its guarantee of atomicity, isolation, or durability, it would rather abandon the transaction entirely than allow it to remain half-finished.

Concurrency bugs are hard to find by testing, cause they are rare, and difficult to reproduce. For such reasons, databases have long tried to hide concurrency issues from application developers by providing transaction isolation

In theory, isolation should make your life easier by letting you pretend that no concurrency is happening: serializable isolation means that the database guarantees that transactions have the same effect as if they ran serially

In practice, isolation has a performance cost, and many databased don’t want to pay that price. Thus it’s common for systems to use weaker levels of isolation, which protect against some concurrency issues, but not all

The lost update problem can occur if an application reads some value from the database, modifies it, and writes back the modified value (a read-modify-write cycle). If two transactions do this concurrently, one of the modifications can be lost, because the second write does not include the first modification. (We sometimes say that the later write clobbers the earlier write.) This pattern occurs in various different scenarios:

In multi leader or leaderless replication system, a common approach in such replicated databases is to allow concurrent writes to create several conflicting versions of a value (also known as siblings), and to use application code or special data structures to resolve and merge these versions after the fact. 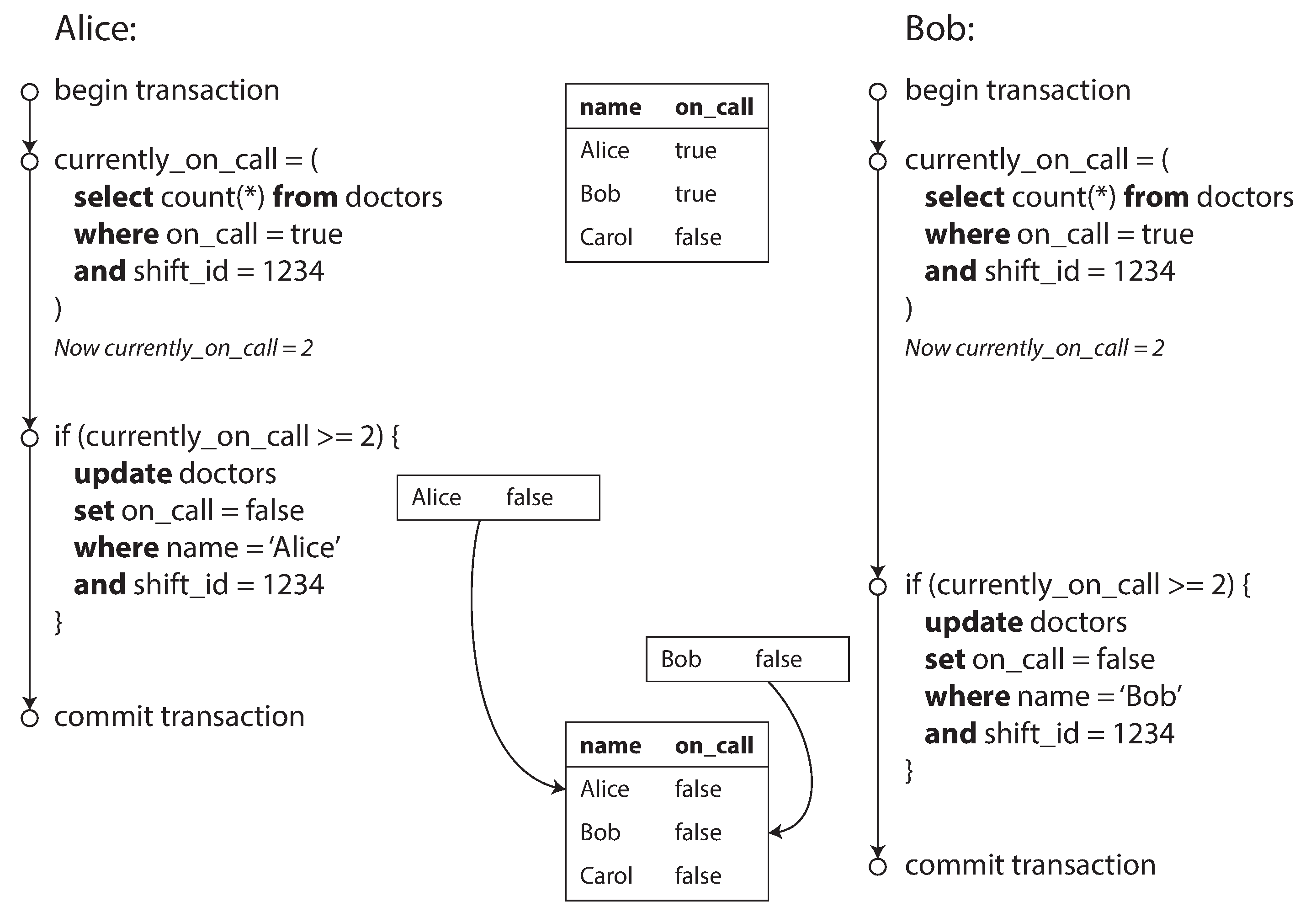 The steps may occur in a different order. For example, you could first make the write, then the SELECT query, and finally decide whether to abort or commit based on the result of the query.

In the case of the doctor on call example, the row being modified in step 3 was one of the rows returned in step 1, so we could make the transaction safe and avoid write skew by locking the rows in step 1 (SELECT FOR UPDATE). However, the other four examples are different: they check for the absence of rows matching some search condition, and the write adds a row matching the same condition. If the query in step 1 doesn’t return any rows, SELECT FOR UPDATE can’t attach locks to anything.

This effect, where a write in one transaction changes the result of a search query in another transaction, is called a phantom [3]. Snapshot isolation avoids phantoms in read-only queries, but in read-write transactions like the examples we discussed, phantoms can lead to particularly tricky cases of write skew. 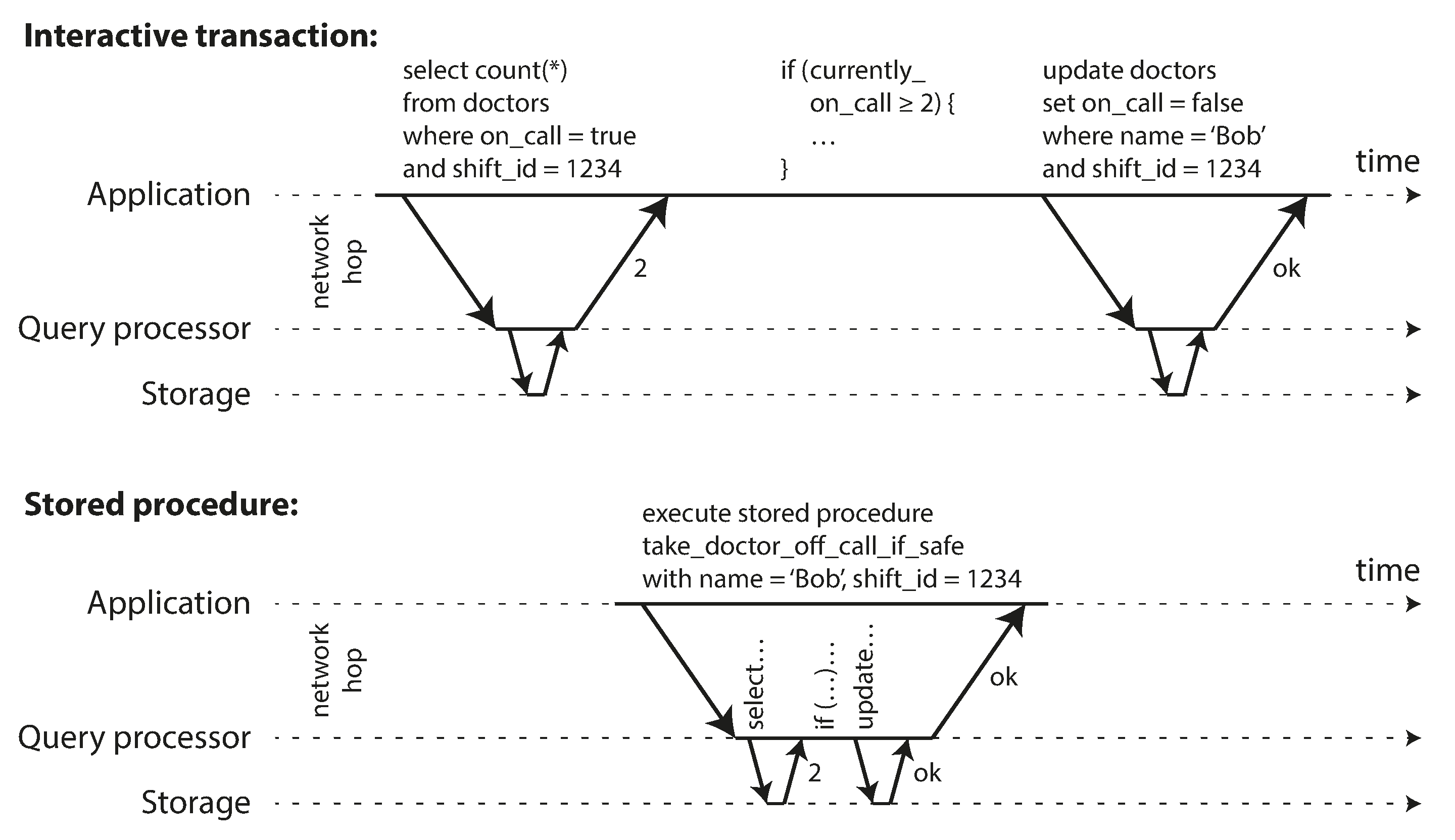 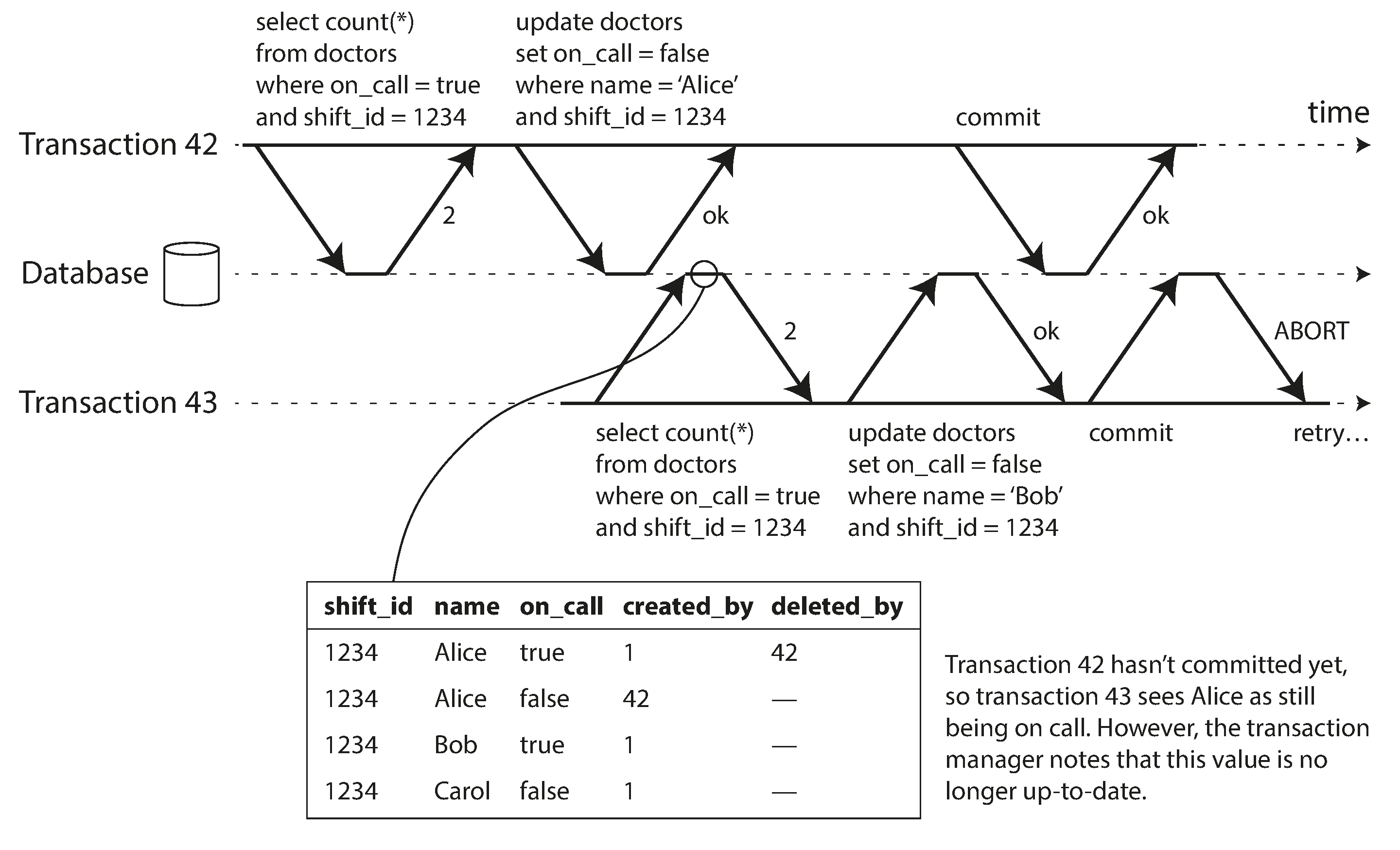 6.2 Detecting writes that affect prior reads

When a transaction writes to the database, it must look in the indexes for any other transactions that have recently read the affected data. This process is similar to acquiring a write lock on the affected key range, but rather than blocking until the readers have committed, the lock acts as a tripwire: it simply notifies the transactions that the data they read may no longer be up to date.

Compared to two-phase locking, the big advantage of serializable snapshot isolation is that one transaction doesn’t need to block waiting for locks held by another transaction. Like under snapshot isolation, writers don’t block readers, and vice versa. This design principle makes query latency much more predictable and less variable. In particular, read-only queries can run on a consistent snapshot without requiring any locks, which is very appealing for read-heavy workloads.